„The History of the National Theatre” – anniversary publication

"The comprehensive history of the National Theatre has not been written yet. All the previous books on the subject were fragmentary and incomplete" says Tomasz Kubikowski, the Theatre’s dramaturge and the editor of the series. "Our publications is the first-ever complete documentation of the National Stage’s history. These books reveal ground-breaking conclusions that challenge conventional notions of the National Stage’s activity in different periods." The extensively illustrated, seven-volume publication summarizes the findings of three generations of scholars. 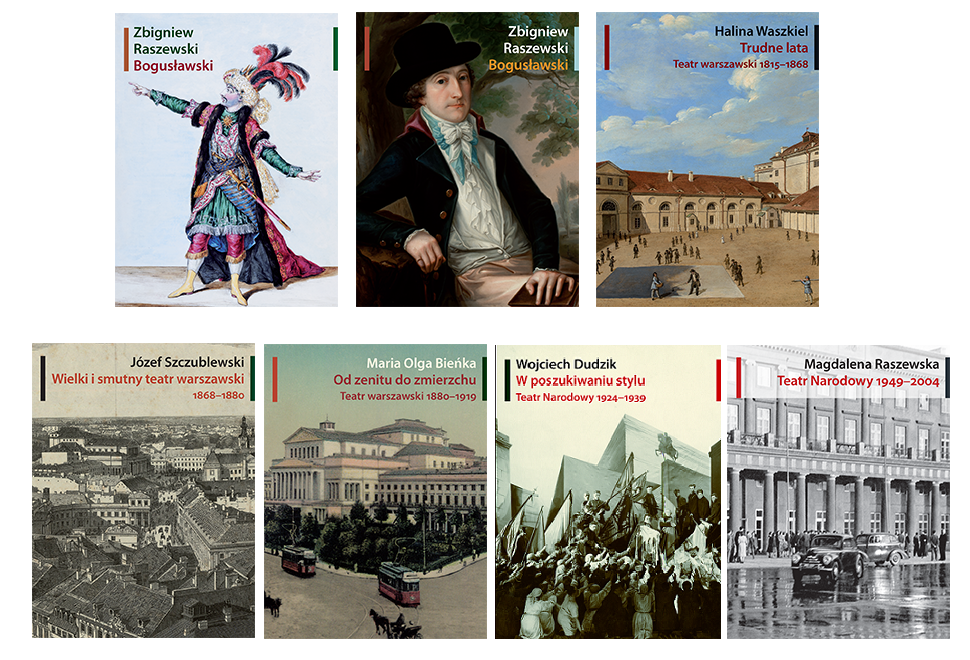 Bogusławski written by Zbigniew Raszewski is a classic study in the Polish theatre historiography. The two-volume story of the life and achievements of "the father of the national stage" is also a portrait of Poland’s culture at the times of its dependence on the neighbouring empires. The new edition of the monograph is accompanied by Patryk Kencki’s preface outlining the beginnings of the Theatre. The first volume is concluded by the events surrounding the Kościuszko Uprising. The second volume recounts Wojciech Bogusławski’s endeavours after the partitions of Poland – the history of acting successes as well as struggles with the notorious "X-s", a group of unfavourable critics. The book is accompanied by the afterword written by Magdalena Raszewska, who comments the monograph according to the current knowledge on Bogusławski.

Hard Years by Halina Waszkiel is the first monograph on the least known period of the National Theatre’s history, when it struggled to find its identity after the fall of the country. The institution lost its name, was housed in the new building and tried to deal with police terror. It supported the uprising and tried to survive its failure. However, even in the most adverse political conditions the Theatre remained "national" in character – the place where the Polish nation could study its own image.

The Great and Sad Theatre of Warsaw by Józef Szczublewski is also a reissue of the classic work of the Polish theatre historiography. The study possesses remarkable literary qualities and covers the exceptional period in the history of the Theatres of Warsaw – the peak moment of "the era of stars": the turbulent careers of actors who faced downfalls and engaged in intrigues. Helena Modrzejewska and Alojzy Żółkowski were two actors that achieved great fame at the time. In the accompanying afterword, Agnieszka Wanicka comments this monograph in the context of present findings on the subject.

Maria Olga Bieńka’s From Zenith until Dusk presents the history of the Drama Team at Theatres of Warsaw at the turn of 19th and 20th centuries. As a result of occupants’ oppression the city was ruined and the artistic quality of performances suffered. The chronicle of creative successes and misfortunes interweaves with descriptions of colourful scandals and endless attempts to revive the institution in the state of decline. This period in the National Stage’s history ends in 1919, when the fire destroyed the theatre building.

In Search of a Style by Wojciech Dudzik is a vivid account of the National Theatre’s activities in the interwar period, when it had to face artistic and economic crises. The author describes events surrounding the opening of the renovated institution, discussions on a programme and struggles of its successive directors – there were eight of them in the course of 15 years. The author rescues many brilliant premieres from oblivion.

The National Theatre 1949–2004 by Magdalena Raszewska is a post-war history of the leading national stage, which documents its political entanglements – different roles and functions imposed by the state. The monograph contains the anthology of the Theatre’s founding documents as well as a number of lists and indexes (i.a., repertoires, acting teams and stages of the National Theatre in the years 1949-2004). The book was published on the occasion of the 240th anniversary of the institution and won the Theatre Book of the Year Prize in 2005.